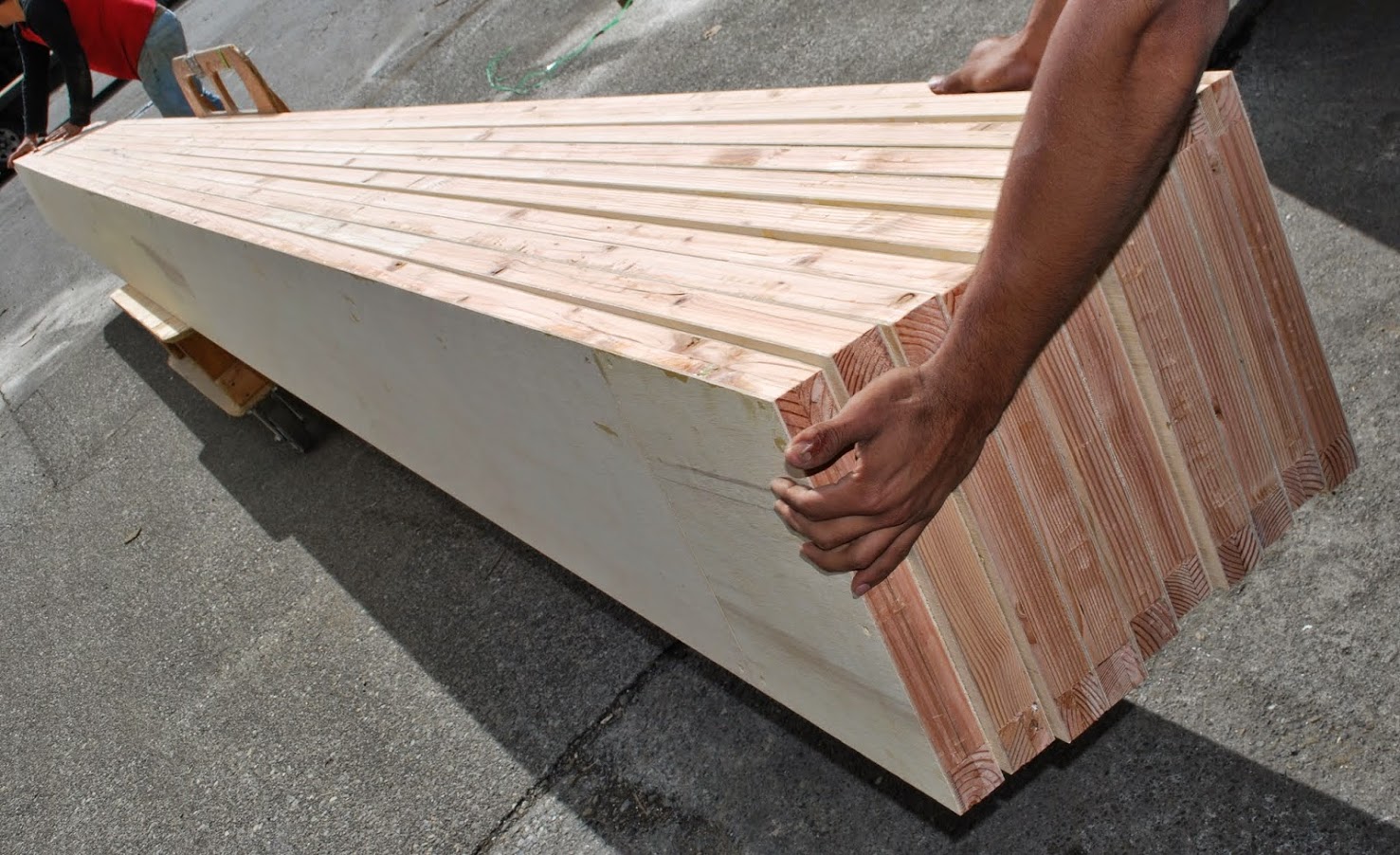 Plywood was the first type of engineered wood to be invented. It is made from thin sheets of wood veneer, called plies or veneers. These are stacked together with the direction of each ply’s grain differing from its neighbours’ by 90° (cross-banding). [1] The plies are bonded under heat and pressure with strong adhesives, usually phenol formaldehyde resin, [2] making plywood a type of composite material. A common reason for using plywood instead of plain wood is its resistance to cracking, shrinkage, twisting/warping, and its general high degree of strength.

A vast number of varieties of plywood exist, with many conditions and uses. Softwood plywood is usually made either of Douglas fir or spruce, pine, and fir, and is typically used for construction and industrial purposes. [3] Decorative plywood is usually faced with hardwood, including red oak, birch, maple, lauan (Philippine mahogany) and a large number of other hardwoods.

The most common varieties of softwood plywood comes in three, five or seven plies with dimensions of 1.2 m × 2.4 m (4 feet × 8 feet). Plies vary in thickness from 1/10″ through 1/6″ depending on the panel thickness. Roofing can use the thinner 3/8-inch plywood. Floorboards are at least 5/8-inch depending on the distance between floor joists. Plywood for flooring applications is often tongue and grooved. Two of the edges will have “grooves” notched into them to fit with the adjacent “tongue” that protrudes from the next board.

High-strength plywood, known as aircraft plywood, is made from mahogany and/or birch. It was used for several World War II fighter aircraft, including the British-built Mosquito bomber. Airplane plywood was adapted for furniture by Alvar Aalto.

Plywood production requires a good log, called a peeler, which is generally straighter and larger in diameter than one required for processing into dimensioned lumber by a sawmill. The log is peeled into sheets of veneer which are then cut to the desired dimensions, dried, patched, glued together and then baked in a press at 280 degrees Fahrenheit and 2800 psi to form the plywood panel. The panel can then be patched, resized, sanded or otherwise refinished, depending on the market it was intended for.

Plywood has been made for thousands of years; the earliest known occurrence of plywood was in ancient Egypt around 3500 BC when wooden articles were made from sawn veneers glued together crosswise. This was originally done due to a shortage of fine wood. Thin sheets of high quality wood were glued over a substrate of lower quality wood for cosmetic effect, with incidental structural benefits. This manner of inventing plywood has occurred repeatedly throughout history. Many of the great English furniture makers such as Sheridan used veneer as a raw material.

Modern plywood in which the veneer are cut on a rotary lathe from softwood logs is of relatively recent origin, invented by Immanuel Nobel. The first such lathes were set up in the United States in the mid 19th century. Plywood has been one of the most ubiquitous building products for decades. Compare to OSB (Oriented strand board) and MDF (Medium-density fibreboard).

Plywood is used in any application that needs high quality wooden sheet material. High quality in this context means resistance to cracking, breaking, shrinkage, twisting and warping. Plywood is also used as an engineering material for stressed skin applications. Plywood has been used in this fashion for marine and aviation application since the WWII era. Most notable is the British De Havilland Mosquito bomber which was primarily made out of wood. Plywood is currently used in stressed skin applications quite successfully[citation needed]. The American designers Charles and Ray Eames and Phil Bolger are world famous for their work with plywood.